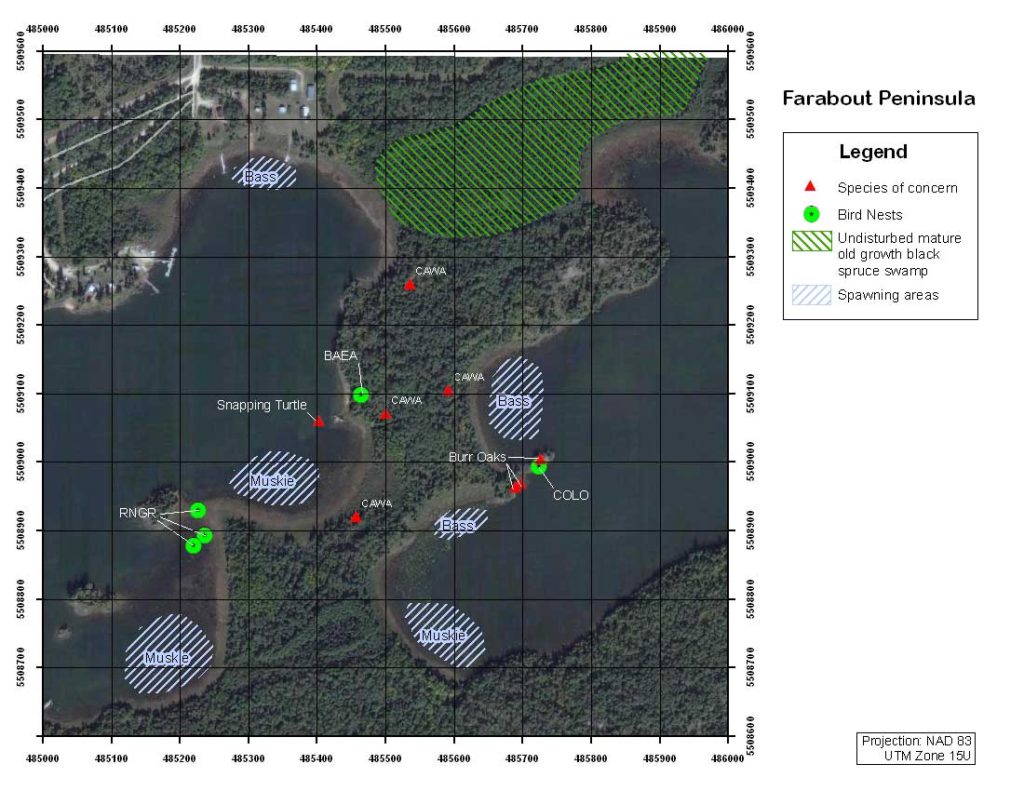 WHY ROAD CONSTRUCTION SHOULD NOT BE PERMITTED

The Farabout Peninsula is almost an island. It is joined to the mainland by a narrow isthmus (about 30 meters wide at its narrowest point) running through a swampy low lying area dividing Outlet Bay from Littleneck Bay. The entire wetland would likely be classified as “Provincially Significant” if evaluated using the Ontario Wetlands Assessment Northern Manual (OMNR 1993).

The isthmus has a rich wetland which attracts wildlife of all sorts. Animal trails, tracks and droppings are obvious evidence of the use of this corridor, particularly by White-tailed Deer and Wolves, and occasionally by Moose. The isthmus provides the only wildlife corridor linking the peninsula to the mainland.

Numerous “natural history values of significance” can be summarized as follows:

Spawning and early life habitat in the weed-beds around the isthmus is critical for the survival of Muskellunge. Therefore, reproductive habitat is key to conservation of this sensitive fish species.

Shoreline disruption has been the distinguishing factor that marks the difference between lakes with reproductive success, and those lakes that require artificial stocking of fish (e.g., in Minnesota, Michigan, Wisconsin, Iowa and Kentucky). It has been found that sediments in “self-sustaining” Muskellunge lakes are those with non-disrupted levels of dissolved nitrogen in organically rich vegetative areas, along with well aerated sediments.

Both spawning areas on either side of the isthmus (bordering Littleneck and Outlet Bays) would be detrimentally affected by road construction. It would require clearing of trees along the length of the isthmus, and spillage of ground materials into the bordering weed beds would be unavoidable.

It is important to recognize that Muskellunge tend to return to the same spawning area in which they were born, or that they have used as adults previously for spawning. They do not readily shift spawning locations with ease, or relocate to nearby suitable spawning sites. Because of this, it is critical that their traditional spawning areas be protected and not disrupted.

Please see the Archaeology Page on this website for more detailed information on the negative impact of road building on the isthmus.