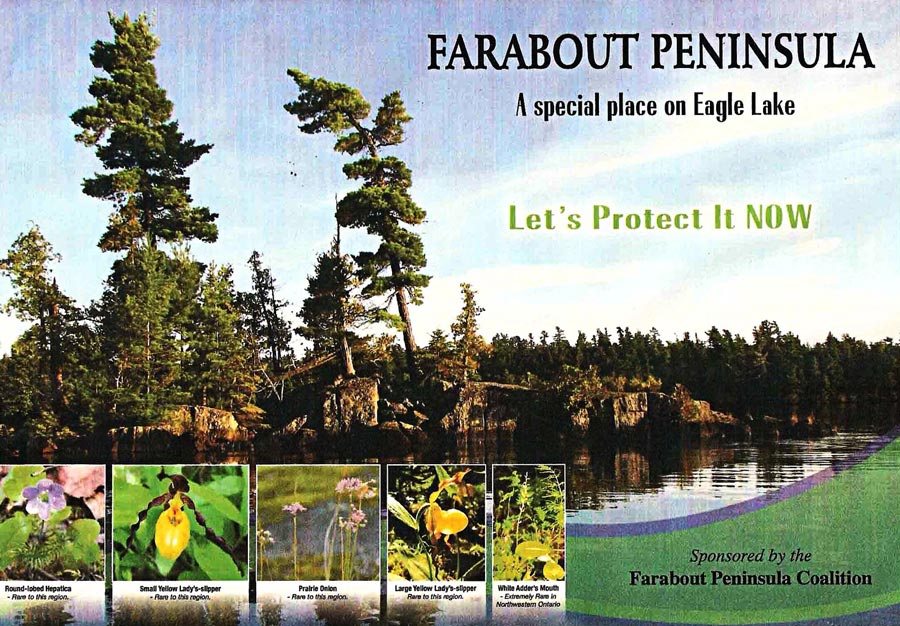 The local community on the north shore of Eagle Lake learned that a Forest Management Plan had recently been approved for the  construction of a road across the narrow isthmus and clearcut of blocks of trees on Farabout Peninsula.

The Farabout Peninsula Coalition was created with participation of Eagle Lake permanent and seasonal residents, tourist lodges, and local naturalists.

A series of petitions protesting the proposed clear-cut were sent to the Ontario Ministries of Natural Resources, Environment and Tourism.

Presentation to Machin Municipal Council detailing implications of the approved clear-cut on Farabout Peninsula. This included costs to local tourist businesses, costs to valuable and sensitive fish and wildlife habitat and costs associated with road repairs that would be the responsibility of residents and business taxpayers of Machin Municipality.

A media campaign led to articles in print media (The Dryden Observer and Thunder Bay Chronicle Journal), with interviews on CBC radio.

Consultation with Chief and staff at Eagle Lake First Nation.

Experts on plant and bird biology from Thunder Bay Field Naturalists conducted surveys of flora and fauna on Farabout Peninsula, with ongoing assistance of local naturalists.

Exploration of Ontario Parks/Northwest Region designating Farabout Peninsula as protected under Eagle Lake Conservation Islands was initiated. This action was not encouraged by MNR as a productive avenue for protection of Farabout Peninsula.

Experts on plant and bird biology from Thunder Bay Field Naturalists continued their field survey of flora and fauna on Farabout Peninsula, with ongoing assistance of local naturalists.

The Dryden Observer publishes feature article on activities of  the Farabout Peninsula Coalition.

A Life Sciences Inventory of Farabout Peninsula was formally presented to the Ontario Ministry of Natural Resources.

A special article on the Farabout Peninsula environmental initiative appeared in the Canadian magazine, The Cottager.

The Farabout Peninsula Coalition hosted a public presentation on special biological features of the peninsula at the Eagle River Recreation Centre (“More Than Just Trees”) attended by 70 people.

A media campaign was continued with print media in Dryden and Thunder Bay, with interviews on CBC radio

Beginning of consultations with the Nature Conservancy of Canada.

A tour of the west end of Farabout Peninsula was held for canoe and kayaker, followed by a presentation by the Coalition on the peninsula, and a dinner was hosted for participants at Evergreen Lodge (located adjacent to the peninsula on Littleneck Bay of Eagle Lake).

The Dryden Observer contained a full article on the canoe/kayak tour of Farabout Peninsula.

Coalition submits a report to Northwest Region, Ontario MNR that provides scientific evidence, which supports the assertion that road  construction on the narrow isthmus leading to Farabout Peninsula will have a serious and enduring negative impact on fish spawning habitat. A formal request is made for a permanent prohibition of road construction on the isthmus to Farabout Peninsula.

Ontario MNR denied the Coalition’s request for a permanent restriction to road construction on the isthmus leading to Farabout Peninsula.

Eagle Lake First Nation send letter to the Director, Northwest Region, MNRF to endorse the goals of the Farabout Coalition

The Coalition reports two important findings to MNRF: 1. Eagle nest on the isthmus to Farabout Peninsula is still active, and 2. The narrow parts of the isthmus are approximately 30 meters across, at high water, which would violate road requirements in MNRF’s Stand and Site Guide.

J. B. Harrison, General Manager of Dryden Forest Management Company sent written communication to the Coalition stating “it is extremely unlikely that DFMC will plan for any allocations on Farabout Peninsula in the 2021-2031 FMP”.

A fundraising dinner was held at North Shore Lodge that was sold-out with 50 in attendance. Keynote speaker was environmental lawyer, J. McLean, who confirmed the importance of acting to protect Farabout Peninsula.

Regular meetings of members of the Coordinating Committee of  the Farabout Peninsula Coalition to discuss 2021-2031 FMP process.

Representatives of the Coalition meet with the new administrative team of Dryden Office of MNRF at the community hall at Eagle Lake First Nation.

Members of the Coalition kayaked around the entire peninsula mapping the many sites on Farabout’s rocky shoreline where kayakers can safely land and picnic, explore and stretch their legs.

Regular meetings of the Coordinating Committee of the Farabout Peninsula Coalition to discuss strategies of community action to prevent tree harvest on the Peninsula if included in 2021-31 FMP.

Representatives of the Coalition meet with the Resources Management Supervisor and Resource Liaison Specialist with the Dryden Office of MNRF at the community hall at Eagle Lake First Nation.

Resources Management Supervisor with the Dryden Office of MNRF toured the isthmus bridging to Farabout Peninsula and some nearby areas on the peninsula.

Coalition members met with the local MPP to provide an update on Coalition activities.

Launched website providing an overview of the activities of the Coalition over the last decade: www.savefarabout.org

Letters from Coalition to Ontario Ministries of Natural Resources and Forestry; Culture, Tourism, and Sport; Environment and Climate Change; and Indigenous Affairs and Reconciliation, with copies of our online petition. We requested a permanent halt to the inclusion of Farabout Peninsula in any future Forest Management Plans.

Ontario Nature, a provincial organization representing 150 environmental groups, and 30,000 members, made a site visit to Farabout Peninsula and held meetings with the Coalition. The Coalition was granted membership in Ontario Nature.

Ontario Nature magazine published article detailing the efforts of the Farabout Coalition over the past decade.

TV Ontario (TVO) posts article on Farabout, “The Never Ending Fight to Save One Ontario Forest”

CBC Radio (Thunder Bay) has news segment in the morning program on the Farabout Coalition and posts a printed copy of this report.

Stage 3 of the archaeological dig on the narrowest part of the isthmus finds multiple Laurel and Black Duck pottery fragments and cache of ochre used for pictograph drawings.

An elder from Eagle Lake First Nation visits the Farabout isthmus with a group of community residents to offer a special ceremony to acknowledge the spiritual value of the location.

A Coalition fundraiser is held at Waldhof Community Hall featuring an update on Coalition activities and a presentation by Thunder Bay archaeologist Bill Ross. The event was well attended filling the hall with 80 registrants.

The Proposed Long-term Management Direction for Farabout Peninsula was presented by staff of the Ministry of Natural Resources and Forestry (MNRF) in conjunction with the Dryden Forest Management Company (DFMC) to members of the Coalition including the Commercial Fishery on Eagle Lake and representatives of two regional associations of tourist operators on Eagle Lake. MNRF and DFMC confirmed that Farabout Peninsula will be removed (“deferred”) from the forthcoming Forest Management Plan for 2021-2031.